The Statue Of Unity In Gujurat, India, The Uncrowned New World Wonder. 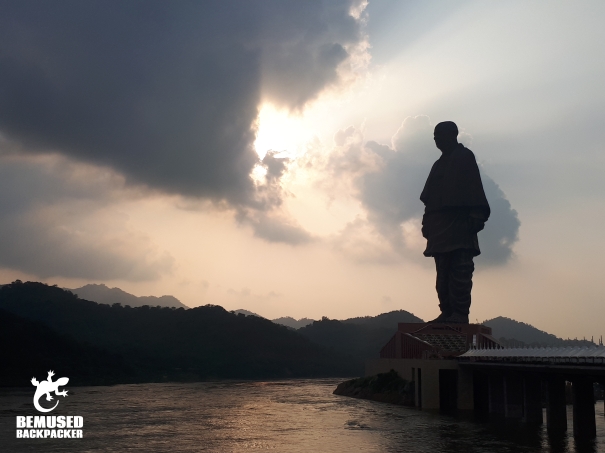 When talking about some of the worlds greatest tourist sites it is easy to launch into hyperbole, everything can be great, or awesome, or amazing. More often than not those superlatives are genuinely earned, but occasionally you come across something special, something so completely unexpected it leaves even writers powerless to describe it. One such site is the Statue of Unity in Gujurat, the uncrowned new World Wonder that every traveller should visit.

I have been overwhelmed many times by my time in Gujurat, by the amazing welcomes, the mindblowing food, the rich history and cultural tapestry, the people, the vibrancy and the energy and the exhaustion of the nine night festival of Navratri.

But nothing could have prepared me for my first glimpse of the now infamous Statue of Unity.

By most definitions it is spectacular in its own right. Erected on October 31st 2018 to commemorate the Indian independence activist and symbol of national unity Vallabhbhai Patel, this colossal statue is beginning to be touted as one of the worlds new ‘must see’ destinations and measures in at the tallest statue of its kind in the world. Easily dwarfing the famed Christ the Redeemer, the Statue of Liberty and even the previous record holder, the giant Spring Temple Buddha in China, it is certainly worthy of a new modern wonder of the world status and should by all definitions qualify as such.

Yet despite this the Statue of Unity in Gujurat will not be found on many travellers bucket lists. You would be hard pressed to find many backpackers who even know what it is, much less where it is, and it has certainly not been without controversy during its construction. Many have lamented the approximately 440 Million GBP spent and the displacement of locals during its construction.

Even now there are a lot of people who think that it should never have been erected.

But frankly all of that just adds to the mystique of the site that has quite literally become one of the biggest tourist attractions in the world. A statue, a world wonder of such immense proportions you would expect to find it in Dubai, and as soon as I heard about its existence it was obviously something I had to see for myself.

I just wasn’t prepared for the sheer size and scope of the monument I had come to see.

Built on an otherwise unassuming and largely barren stretch of the Narmada River, the statue dominates the surrounding landscape for miles, staring out over the Sardar Sarovar Dam he dreamt of building but passed away before he could see completed, and the sheer size is so fantastical it can be viewed long before you even reach the site.

The exhaustion of the long and tiring bus journey to reach the statue from Ahmedabad is washed away as you catch that first glimpse, an excited, anticipatory feeling akin to catching split second glimpses of the Statue of Liberty through the concrete and steel of New York City for the first time, or the tip of the Great Pyramid over the skyline of Cairo.

Except this time there is nothing to hide or compete with the sheer size of the statue, it simply dominates the entire landscape as you navigate your way through the numerous security an ticketing barriers. There is no angle from which you can’t see it, no view which it does not command attention. 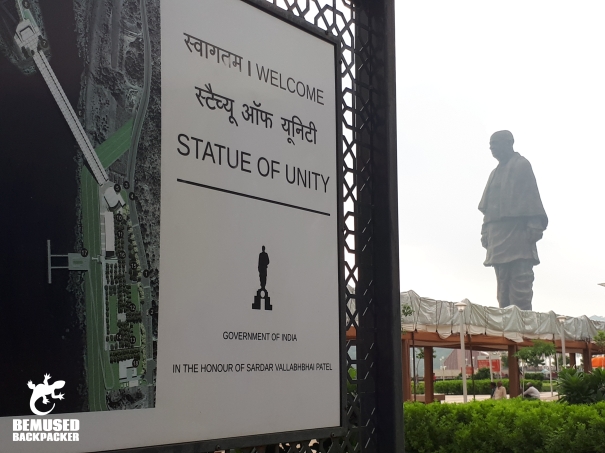 As you walk the length of the extensive promenade the statue is so immense it is hard to grasp just how big it truly is without any frame of reference to other structures, until that is you reach the base of the statue and realise a single toe dwarfs you! The size of the statue is just so immense if you didn’t know already you can barely even discern what it is this close up!

It takes the large museum at the statue base, dedicated to the planning and building of the statue as well as the man himself, and a multiple elevator ride to the internal viewing platforms inside the statue to really put things into context.

An entire tourism mecca is growing from this one -admittedly colossal – single statue. New hotels are springing up to deal with the already gowing demand, tourism operators are beginning to provide travellers with activities and tours, businesses that service and provide for travellers are finding their place.

From where there was previously nothing in terms of tourism in the region, an entire industry is springing up, creating countless jobs, pumping billions of tourism dollars into the area and boosting the local economy in ways that it could never have imagined a decade ago.

More than a mere attraction.

Once the initial sheer awe of the site had dissipated enough to allow me to actually take things in, I began to notice something else about the site that I hadn’t noticed before.

I couldn’t really define it at first, it was an indefinable, abstract feeling I was picking up from the locals around me. It was only when I sat down for the start of the obligatory light show that I could pinpoint exactly what that feeling was.

Now to be honest the light show was just okay, nothing really special, but then obligatory light shows at monuments like this rarely are. It didn’t help that the sound was all in Hindi and I couldn’t find any headsets or means to listen in any other language.

But what that did allow me to do was observe those around me. I could see the men pushing their chests out ever so slightly, see the look in the womens eyes as they watched the light dance over the monument, and I could feel the roar as we all stood for the closing national anthem and everyone cheered.

That feeling I felt earlier was pure pride and unadulterated patriotism in what the statue represents.

A symbol of unity.

And this is why it is essential all international travellers add this to their bucket lists right now. Anyone visiting Gujurat, or India in general, cannot fail to feel more connected to the country or her people after feeling just a small piece of that national pride.

Putting Gujurat on the world map.

In the relatively short time it has been standing, the Statue of Unity has put this otherwise quiet part of Gujurat on the map. It has brought international acclaim and attention, brought millions into a newly established economy and this is only set to keep growing.

At barely a year old the statue is now bringing in over 8,500 tourists a day. Adventure tourism companies and hotels are springing up to service the unprecedented amount of visitors and there are even talks about starting seaplane service routes from Ahmedabad.

No matter what side of the fence you fell on during the building of this monument, whether you think it was a monumental folly, a waste of money or a new world wonder in the making, the absolute fact is that the Statue of Unity is drawing in people from all over the world in record – and growing – numbers, and nothing unifies people more than travel.

And that seems to be a fitting tribute to a man who spent his life unifying India, and makes the Statue of Unity a worthy addition to any gap year bucket list.

This is a paid article written in partnership with Gujurat Tourism with products or services supplied by them. Full editorial integrity is maintained at all times. The views and opinions expressed are entirely the authors own based on personal experiences when travelling and are honest and factual without any bias.

Breaking All The Travel Rules In India.

Is India Really So Difficult For Backpackers?

Tagged with: Gujurat, Gujurat India, Gujurat Tourism, India, Statue of Unity, things to do in Gujurat, things to see in Gujurat
Posted in Destinations

14 comments on “The Statue Of Unity In Gujurat, India, The Uncrowned New World Wonder.”