Lalibela is a small town in northern Ethiopia that despite being a significant pilgrimage site for Coptic Christians and a UNESCO world heritage site, has yet to be hit by mass tourism. But as travellers wake up to the beauty of this region and start arriving in larger numbers, the local population are already taking steps to make sure that any future influx of tourism has a balanced, positive impact on the local population.

Lalibella is one of those rare, iconic destinations that very few people know about, but is so distinctive and so intrinsically woven with the cradle of Christianity that many people will at the very least recognise it’s most famous attraction, the rock hewn church of Bet Giyorgis. By sight, if not by name.

Lalibella is known for its breathtaking complex of rock hewn churches, and even though I am far from being a religious man, it is these historic structures that drew me to this small town in an obscure region of Ethiopia. Being a little bit of a history geek I had read about these structures for most of my life in my various amateur studies of biblical archaeology, and it was a true privilege to walk amongst the underground tunnels and rock carved churches that for centuries have defied scholars and academics attempts to understand them.

My Introduction to the Rock Hewn Churches of Lalibela.

The rain was just starting as I arrived at the World Heritage site, a fine drizzle that soaked through everything, but it was not enough to dampen my spirits, nor my excitement, and I hurriedly paid my entrance fee, noting the large sign as I did so. 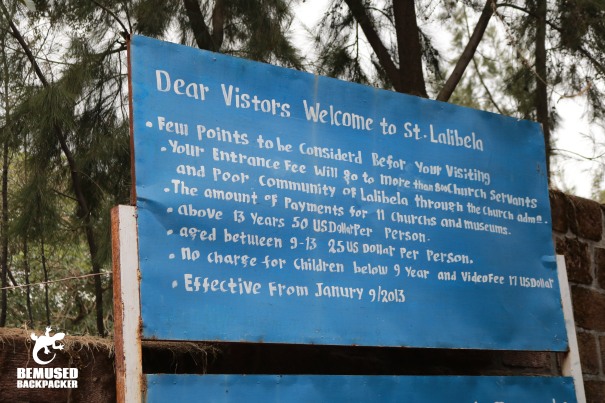 I thought that was pretty nice. My money was actually doing some good and I was glad that the relatively steep price compared to travel in the rest of the country wasn’t just arbitrary greed. It was ‘giving back’ in the sense that most of us know how. Little did I know then that this was just the start of the sustainable and positive tourism initiatives that were being introduced by the local government.

The guide that had been assigned to my small group began giving a brief history of the site, extolling the wonders of their creation and giving favour to the divine as much as the historical as local priests tend to do. He of course agreed wholeheartedly with academics that it was King Lalibela who built the church complex but diverged wildly in the source of the King’s workforce, saying that the earthly tools were aided by a divine spirit in the form of Angels. I am not a believer at all, but on seeing the first of the many churches in the complex for the first time, I actually found it hard to disagree.

The rain was still slowly soaking the ground as we walked, giving the dirt pathways a slippery sheen, and although my initial thoughts on the monstrosity of a modern protective structure that covered the first church in the complex like a metal awning I have to admit I was glad of the respite from the inclement weather as I explored the architecture and the carvings that had survived the centuries.

This is one of the major reasons I travel, I love history, architecture and culture, and to be able to see it all up close is a truly special thing.

The guide was interesting enough in his telling of the history of the churches, but despite this my mind started to wander as I took in the surroundings instead. I took off my shoes and left them as instructed in the pile by the doorway as I entered the first of the beautifully carved cathedrals, walking alongside the crowds of not tourists, but faithful worshippers. Locals who flowed in and out of the labyrinthine caves and doorways, the faithful attending services in the presence of the divine. 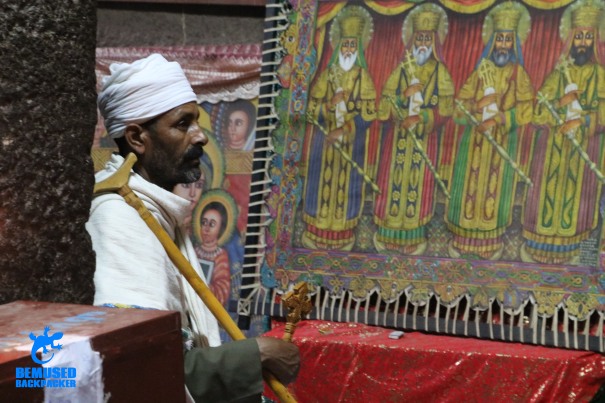 It was a solid reminder that this site was far more than a tourist attraction, far more than a World Heritage Site, it was a local place of worship too. The fact that I didn’t believe was inconsequential. They believed, and that is what mattered.

Our guide timed his short, prepared speech to perfection, giving us the chance to see the murals and the carvings inside the church in between the crowds of worshippers that the services themselves would bring before ushering us on. Starting to head back to the entrance to retrieve my shoes, I was urged instead through a different exit, only to find my shoes perfectly lined up and waiting for me, with a young man stood beside them guiding me to where they were.

The guide explained that this was a job given to local poor and homeless who would rely on tips instead of resorting to begging for money.

And it was a job, one supported by tips not a wage, but still, and not just a token one either. As part of a local initiative to both improve tourism standards for the heritage site and ensure the money earned from tourism had a direct, local impact, the beggars who would have otherwise been moved on from the site as nothing more than a nuisance at best were instead made to feel useful by providing a service.

This was infinitely better for the tourists and the locals alike.

The authorities had seen the problems begging had caused for tourism in other regions and wanted to do something about it, but instead of simply removing and displacing the problem they created a unique solution.

Moving through the maze of tunnels away from the church, the rain was starting to make some of the mud steps and alleyways treacherous, and I noticed more and more of these unofficial guides moving forward to assist the women and the elderly as they traversed the terrain.

My unofficial guide held back from the group, remaining as innocuous as he possibly could, perhaps in an attempt to combat the typical tourist complaint of aggressive touts, and waited behind often in an attempt to usher any stragglers back to the fold (usually me as I got caught up staring at the architecture) before resuming his duties outside of each church and cave we stopped at.

The specific job of guarding and moving our shoes as we explored the churches wasn’t strictly necessary of course. Each church had multiple entrances and exits with local worshippers flooding in and out of each of them seemingly at random, we could have easily backtracked through the entrance we came in. But we didn’t. Not because our guide ushered us through specific exits, but because it felt right.

This wasn’t altruism, this wasn’t an attempt at supporting a local charity or making an effort to try and ‘give back’, this was a very small thing on our part – as travellers – to work alongside locals and create a symbiotic, positive relationship.

This was a man who did not want to be seen as poor. He simply wanted to take advantage of the opportunities in tourism and provide a service that whilst may not be essential, was more important than I think many people initially realised. This method of tipping for a specific service rather than begging is providing these guides with more than just a simple income, it is giving them some pride. Pride in not having to beg for money but providing a service for it, pride in a days work, pride in being able to show their home to visitors.

Being useful, and being seen as useful, is a vastly underrated thing, and so are the problems arising from the loss of pride that goes with not having that status.

This initiative may not be grand, it may not have the backing of major sustainability organisations, but it is a local enterprise that goes far beyond a superficial, transactional level of sustainability, one that creates a true partnership between the local population and the visitors coming to see the world wonders that exist there, a true opportunity to support an initiative created by locals.

And at the end of the day, that is what positive impact travel is all about.

Positive impact travel can exist on many levels, from travelling overland to reduce the carbon footprint from air travel or staying in local guesthouses or inns instead of international brand hotels, but it also exists on this tiny, local level that forces you to think about the effect you have on the world around you as you travel through it.

I fulfilled one of my personal major bucket list items by seeing the rock hewn churches of Lalibela, and I am glad that I was able to – in some small way – contribute to a mutually beneficial, positive travel experience for both travellers and locals alike.

What do you think? Did you enjoy this article? I would love to hear your thoughts in the comments section below or please join in the discussion on my Facebook or Twitter pages on this important topic, and please feel free to share it with any or all of the social media buttons and spread the word.

If you want to get more great backpacking tips, advice and inspiration, please subscribe to updates via email in the box to your right.

This article was written in partnership with Better Places Travel. The views and opinions expressed are entirely the authors own based on personal experiences when travelling and are honest and factual without any bias.

Ethiopian Coffee Culture: An Invitation To The Famous Coffee Ceremony.

Is It Safe To Travel In Ethiopia?

The Vegetarian And Vegan Guide To Ethiopia.

Why All Backpackers Should Travel To Ethiopia.