Surviving The Cannonball Run For The Sunrise Tour On Mount Bromo 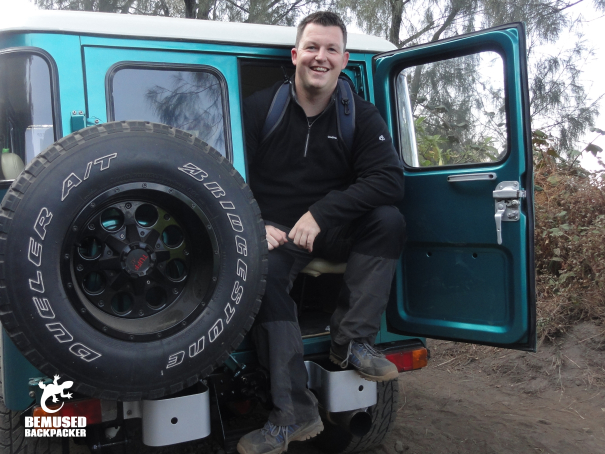 It’s 2 AM, no one has had any sleep, there is zero visibility and a hundred jeeps and motorbikes careen up a volcano at full speed in a neck breaking race to capture the ultimate selfie!

This death defying cannonball run took place on Mount Bromo in preparation for the ever popular sunrise tour, one of the absolute must do bucket list items for any trip to Indonesia.

Starting the run at the Jiwa Jawa hotel, a convoy of a dozen jeeps set out on what turned out to be a much longer and hair raising journey than anyone thought it would be. And it wasn’t just because the jeeps were old, cramped and looked like they had been jerry rigged from old World War II vehicles.

What about a black Trans Am? Nah, that’s been done!

Our spines and rib cages took a beating in the stripped down jeeps. The lack of suspension or any form of comfort made this a bare bones experience in more ways than one! Not that it was too much of an issue, sometimes the fun of adventure travel is in the difficulty you face, and I was excited to get to our destination.

The pitch black outside was made only marginally better by the fading beam from the headlights bulb, and visibility dropped rapidly as we rose higher and hit a thick wall of fog and cloud. Pretty soon it was difficult to see anything at all, and ghostly images emerged from the fog as even more jeeps and motorbikes joined our ever increasing convoy up the mountain. Each one from other hostels and hotels along the way and each one desperate to reach the top and claim prime position for the viewing stakes.

It wasn’t long before I couldn’t see two feet in front of the strained headlamps as we bounced heavily over the rough terrain at full speed. The increasingly thin and winding mountain road filled up quickly as other jeeps overtook us or fell behind, dangerously swerving in front of each other before disappearing back into the fog.

Soon there were dozens of vehicles careening up a narrow mountain path to race to the volcano’s viewing point.

It really wasn’t the fact that everyone was jostling for pole position, anyone who has ever seen traffic in India or or half of south east Asia will understand the organised chaos of ignoring any type of road rules whatsoever, but it was the fact that we were doing this up a volcano, at full speed, with no damn visibility!

“Tour guides my ass! These guys are Cannonballers!”

The fog did eventually lift as the convoy climbed higher up the volcano, fortunately – or miraculously – without any of the jeeps shooting over the side of the mountain or exploding in a fiery collision that a Hollywood movie would be proud of, but the breakneck race did not end there. In fact it only got worse as the sheer number of vehicles trying to sprint up the mountain became clear.

This is where the trek got worse.

The choke of exhaust fumes hit me like a cloud of poison gas as I stepped out of the jeep into the crush of people, trapped jeeps and motorbikes revving suicidally through the entire mess. The small group from my jeep got separated quickly in the still pitch black crush, and we each made our own way trepidly through the hazy darkness, each risking life and limb climbing through the crowds of people and vehicles. I’m lucky I’m 6″2 and not easily missed as motorbikes swerved at the last minute to avoid me much like they would as if a brick wall had suddenly loomed in front of them, and I had to use my sheer physical size to barge through the crowd more than once as motorbikes and dirtbikes careened through the crowd in both directions with sheer disregard to any of the pedestrians making the journey on foot.

Of the relatively small convoy that left our hotel, I had somehow left them all behind as I strained upward toward the summit, somehow avoiding the certain death of being having a jeep or a motorbike crush me in the insane stampede and coughing and spluttering from the exhaust fumes and pollution even through the completely ineffective face mask I was wearing.

I had won the frenzied cannonball run of Mount Bromo!

Only to find I had been beaten by people who had stayed on the mountain overnight.

These people had camped out all night and already taken up the premier viewing positions and had cemented their claims by using a sea of damn selfie sticks to ensure that no one behind them could see a single thing.

So much for getting up earlier to get a good spot.

Mount Bromo is one of the single most visited places in Indonesia for a very good reason. The sunrise and the views – when you can see them – really are spectacular. I would even argue the sunrise view is among the most visually stunning views in the world.

The problem with unchecked mass tourism.

The problem is mismanaged mass tourism and unchecked tour groups have turned the experience into a wholly unpleasant mess.

And that is a huge shame.

The view of mount Bromo is genuinely amazing. There is a reason that so many visitors flock here every single morning. You just have to go through hell to see it!

I was particularly unlucky on this trip that the sunrise view was completely obscured by not just selfie sticks but fog and haze too, making the chaotic sunrise Cannonball run completely futile, but I did manage to get the views from a different viewing point once the sun was up and the fog cleared.

And it was spectacular, without a doubt.

It is just such a shame that unchecked mass tourism is being allowed to run rampant without any balance, management or concern for the natural resource the local tourism industry relies on.

Yes the view is spectacular, but what any guidebook will never tell you is that it is absolute hell to get up and see it.

Seeing the sunrise on Mount Bromo does still absolutely deserve it’s place on anyone’s bucket list. It’s sheer awe inspiring beauty really is worth the hype and this alone will ensure that visitors still flock here, but with the amount of other stunning volcanoes and views along the Indonesian ring of fire, I can’t help thinking that travellers would be much better off visiting lesser known volcanic sites just to avoid the crowds and the hellish, toxic ascent.

Until the mess of sunrise tours are cleaned up and managed properly and responsibly, I really don’t think the view is worth the trouble, no matter how bucket list worthy it is. It really can’t be that hard to implement a tour permit system or limit the numbers of people or groups that can go up each morning, I mean there are plenty of other sites that do so.

I really hope the tourism authorities take note and clamp down on the situation soon, or they risk putting people off coming here and infinitely more important ruining the very spot that so many people come to see.

Did you enjoy this article? Have you been to mount Bromo? What did you think of the tours on offer? I would love to hear your thoughts in the comments section below or on my Facebook or Twitter pages and please feel free to share it with any or all of the social media buttons. If you want to get more great backpacking tips, advice and inspiration, please subscribe to updates via email in the box to your right.

This article was written in partnership with the Indonesian Ministry Of Tourism as part of the #WonderfulIndonesia campaign. The views and opinions expressed are entirely the authors own based on personal experiences when travelling and are honest and factual without any bias.

The Prambanan Temples And The Legend Of The Slender Virgin.

Volcano Trekking In The Indonesian Ring Of Fire.