The Dragos Voda Bison Reserve in Romania is getting the balance between tourism and conservation absolutely right, and by succeeding in their mission to prevent these animals from going extinct they are the perfect example of how tourism and zoo breeding programmes can have a positive impact.

Given my love for animals and my passion for wildlife tourism, when I was given the chance to visit a Bison reserve in Romania I was eager to see how they balance their ethical responsibilities with the demands for tourism, and what I saw surprised me.

I admit I didn’t know all that much about the many issues surrounding Bison conservation before I arrived here, beyond the fact that they are an at risk species of course, and given Romania’s general struggles with tourism infrastructure, I was both excited and wary of visiting this reserve in equal measure.

I needn’t have worried at all.

The reservation itself – which has been open since 1968 – covers 11, 500 hectares across Neamt county and is one of only four protected areas in the Vanatori – Neamt natural park. It was set up with the obvious primary aim of protecting and conserving the European Bison, which had been facing habitat destruction and hunting to the point of being driven to the point of extinction in the wild back in the 1920’s.

But thanks to the efforts of this reserve and a few others throughout Europe, the European Bison has the beginnings of becoming a true conservation success story and is solid proof that the international breeding programmes run by zoos are an essential part of the conservation process.

Going from the point of extinction in the wild, there are now just over 3000 wild Bison in Europe, all in protected areas such as these, and all bred from the mere 54 captive Bison when there were almost no wild Bison left.

When I arrived at the reserve and saw a small family area just outside the main entrance complete with areas specifically for children, I was a little worried that as in so many other places, mass tourism would be given prominence over the needs of the animals. That turned out to be as far from the truth as I could possibly have been.

Of the 28 Bison in this huge reserve, only 6 are available to be seen by tourists in a relatively small area. The rest are in a vast acclimatisation area which acts as a staging post to prepare them for the wild where they cannot be disturbed by tourists. The area open to tourists is marked by an impressive viewing bridge, that can be entered or exited from either side and allows for great views over a few clearings in the heavily forested reserve area.

During our time at the reserve, we were the only small group exploring the impressive viewing area, and despite waiting quietly and patiently we didn’t see a single one of the six Bison available for the public to see. I guess they were off doing their own thing in the forest somewhere. 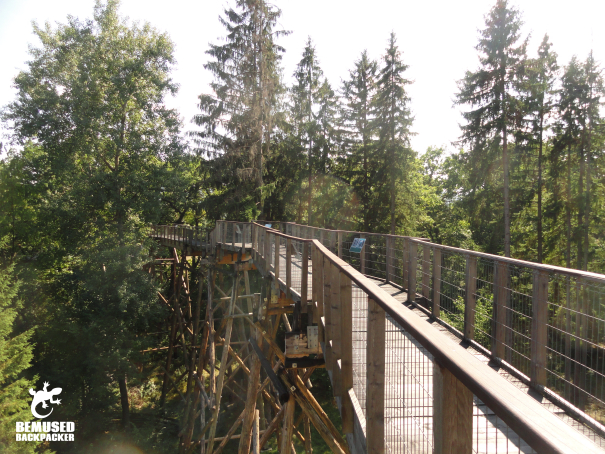 Now I won’t lie, like most people I would have loved to have seen one up close and personal. But unlike most tourists I also understand why I didn’t, so it wasn’t too much of a disappointment. The overriding paradigm at this reserve is that the tourists needs are secondary and the Bison’s needs come first, and that is exactly what it should be! If you are lucky enough to catch a glimpse of one, then great. If not, it’s just bad luck, the reserve is there for the Bison, not the tourist.

The reserve wasn’t perfect of course and despite being a relatively decent complex, it did suffer a little from the general lack of tourism infrastructure and lack of international tourism interest that Romania is still building up. The small education area was very basic and although a small educational playroom was provided for young children, there were no real concessions to international visitors or adults wanting to learn more about the Bison themselves. I would have loved to have seen more information given on the whys and hows of the reservation, it’s history, the day to day care of the Bison’s themselves and certainly much more information and education on past, current and future conservation efforts.

But these are things that can easily be fixed. The basics are there, they just need to be utilised more.

What the reserve absolutely got right was the balance between conservation, animal care and tourism, and that is infinitely more important.

I hope that as Romania surges forward with a renewed vigour for tourism, and as it opens up to more visitor numbers, that the Bison reserve remembers this paradigm and keeps that balance between tourism and conservation, because right now they are getting it absolutely right.

This article was written in partnership with Eventur Bucharest as part of the #PriNeamt campaign. The views and opinions expressed are entirely the authors own based on personal experiences when travelling and are honest and factual without any bias.

Climbing The Olympus Of Romania.

The Horrible Truth About Animal Sanctuaries.

2 comments on “Visiting The Dragos Voda Bison Reserve In Romania.”