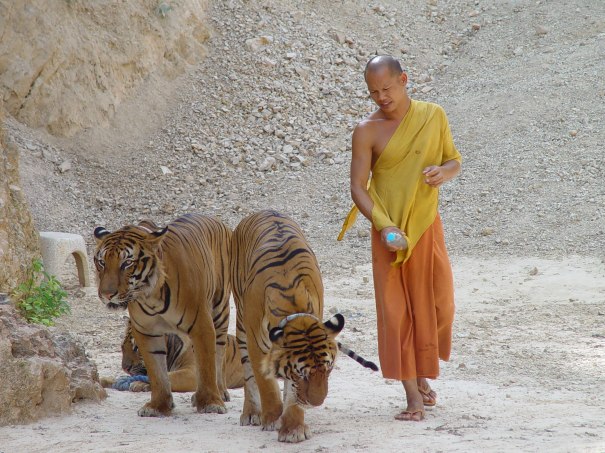 After being shut down and having the full extent of it’s abuse and illegality put on full display for the world to see last year, now the infamous Tiger Temple in Kanchanaburi is to reopen with a new name.

Last year, after years of outcry and campaigning from wildlife protection charities and organisations, and numerous false starts and failed attempts, the Tiger Temple in Thailand was finally raided and shut down.

This was a moment of triumph for many campaigners, including myself. I have been urging travellers to boycott the Tiger Temple and calling for it to be shut down for years.

The abuse and torture of the tigers held at the supposed Buddhist facility was well known to many campaigners and organisations, the evidence had been undeniable since an investigation by Care For The Wild International in 2008 and more recently the report by National Geographic and Cee4Life, but the full extent of the torture, the abuse and the sheer level of horrific illegality shocked everyone.

What followed that seizure and shut down has been nothing short of a horrendous act of incompetence at best, and downright corruption at worst. The granting of a zoo license shortly before the raid was conducted, the lack of facilities to properly house the confiscated tigers, the volunteers at the temple completely denying any knowledge of what was going on (despite the facts being rammed down their throats for years) the lack of progress on the prosecution of the abbot, the monks and the staff who worked at the temple and committed these crimes and now the seemingly quiet sweeping under the rug of the whole case, all of this and so much more has been one giant cluster fuck that has endangered any attempt to properly care for and protect any tigers that were rescued from the temple, and now promises to allow things to return back to the way they were.

But now the Tiger Temple is essentially reopening with a new name.

A so called ‘zoo’ is nearing completion right next door to the temple itself, and this will be in no way anything even approaching a genuine, responsible zoo.

Although legally this new zoo has nothing to do with the Tiger Temple, on paper at least, it is owned and is being operated by the Golden Tiger (Thailand) limited company, and reports suggest that is even what the new facility will be called. Surely it is just a coincidence then that this is the name the Tiger Temple company legally changed its name to in February 2017?

This is just a new facility run by the same people.

With corruption seemingly running rife amongst the Thai authorities, zero convictions of the abbot or an of the monks involved in the Tiger Temple, even private legal proceedings against the abbot and the temple getting nowhere, and nowhere for the Thai government to properly house or keep the confiscated and rescued tigers, it seems like all this is just a rebranding exercise for the tiger temple who now want to be seen as true rescuers of some of the tigers that were confiscated, as well as other tigers from another breeding centre that is struggling to handle them.

Of course all the usual letter of the law games are being played, with talk from officials about the new zoo having to adhere to certain standards to be able to operate, the truth of the matter is they are being allowed to return to the status quo of owning, breeding and exploiting tigers despite its illegality being undisputed.

All this and much, much more. This is no longer simple accusations either. The proof has been found and is undeniable.

So what can travellers do?

Boycott the new facility and continue to add campaign pressure to prosecute those responsible for the original Tiger Temple.

Do not in any way support this new zoo with your custom or your tourist money.

By refusing to have anything to do with the new ‘zoo’ – and I hate using that term for it – in large numbers, travellers can send a clear and distinct message that this kind of exploitative tourism is no longer tolerable. That travellers and tourists will no longer support it and allow people to profit from it.

There is currently no real responsible alternative for the tigers, nor is there any will from the corrupt Thai authorities to give them one. When the temple was originally raided last year, Four Paws, an animal welfare group from Austria, started to campaign the wildlife department of Thailand for the construction of a true tiger sanctuary on government land, large enough to hold 200 animals. This would allow the tigers to live out their lives in semi wild conditions, where they are left alone as much as possible and are supported by real conservation efforts.

This type of true sanctuary works extremely well, as has been proven with orang utan sanctuaries in Borneo and man others around the world.

True sanctuaries like this can be supported monetarily by true responsible tourism, where profits from tourism not only allow for the upkeep and care of the animals and their new environment, but can also provide a healthy profit for the government too.

This is the real way forward. This is how we can give the tigers of Thailand a chance at a real future.

So help spread the word, support Four Paws and other international groups in their efforts to get a true tiger sanctuary in Thailand, and in the meantime, whatever you do, do not go and support this despicable new attraction.

Is This The End Of Thailand’s Tiger Temple?

It IS Finally The End Of The Tiger Temple: But What Happens To The Tigers Now?